Islam between Culture and Politics 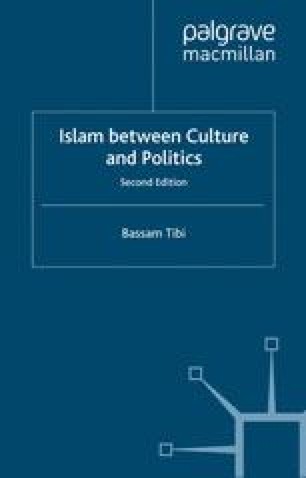 The Politicisation of Religion: Political Islam as a Defensive-Cultural Response to Global Challenges. A Social-Scientific Interpretation

Political religion as it occurs at times imbued with ethnicity, and in some cases (for example, Islam) mixed with universalist claims is the hallmark of our age. However, this phenomenon has precedents. The historical context at issue is related to two attempts that have been made by two civilisations to expand by spreading far beyond the boundaries of their area of origin. First, the Islamic expansion was able to transform the Mediterranean from a Roman into an Islamic sea and even to encroach into Europe itself.1 Then followed the European expansion which succeeded in becoming global, mapping the world of Islam into its orbit. The Islamic civilisation failed to transform its futuhat-conquests into a global Islamisation. Contemporary masterminds of Islamic awakening (sahwa Islamiyya) are probably right in arguing that European — later on becoming Western — expansion has been taking place at the expense of Islamic civilisation. To understand this, the reader needs to know that Islam views itself as the proper frame for realising world peace. In other words, Islam also has its own globalisation project. It is envisaged that this goal will be accomplished by expanding the house of Islam/dar al-Islam into a global dar al-salam (house of peace). In my view, this is the ultimate point of departure for a proper understanding of the universalist nature of contemporary political Islam and of the worldview presented by its exponents.

Political Ideology Political Regime Muslim Country Muslim Society Islamic Civilisation
These keywords were added by machine and not by the authors. This process is experimental and the keywords may be updated as the learning algorithm improves.
This is a preview of subscription content, log in to check access.

Cite this chapter as:
Tibi B. (2005) The Politicisation of Religion: Political Islam as a Defensive-Cultural Response to Global Challenges. A Social-Scientific Interpretation. In: Islam between Culture and Politics. Palgrave Macmillan, London. https://doi.org/10.1057/9780230204157_6