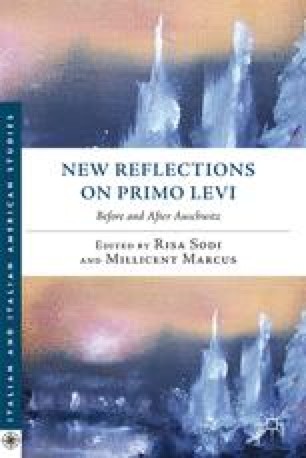 Although much has been said of Primo Levi’s use of language, its epistemological and ethical bases, and its negotiation of that which is unspeakable, his attempts at a performative mode have not enjoyed the same critical attention.1 My chapter focuses on performance and its place in and its relation to Levi’s work. The motif of performance in Levi’s prose narrative has received some critical attention and the performances of Levi’s works adapted for the stage have also enjoyed some critical consideration. Performances of Levi’s work in other media, however, and especially for the radio, are as yet under-studied. In this chapter, I bring into proximity these varied types of live performance (as opposed to cinematic adaptation) to interrogate the shifts that these generic differences impose on linguistic codes and contexts. After investigating some key examples of theatrical performance in Levi’s prose narrative, I focus principally on performances of his work that took place during his lifetime, and primarily on performances of Se questo è un uomo (Survival at Auschwitz).2 I will have occasion, toward my conclusion, to briefly discuss Sir Antony Sher’s 2004–2005 performances of his dramatic one-man show, Primo.

Live Performance Critical Attention Linguistic Sign Existential Loneliness Stage Direction
These keywords were added by machine and not by the authors. This process is experimental and the keywords may be updated as the learning algorithm improves.

I can say without fear of exaggeration or flattery that the television and especially the radio versions of my work have been of great importance to me, because they filled a void that I had never filled before, the space of live representation, of the theatre, that I have scarcely touched on, of cinema that I have never encountered. The experience of reaching an audience directly, not through the medium of the pages of a book, but through the eye and the ear, was extremely stimulating to me.