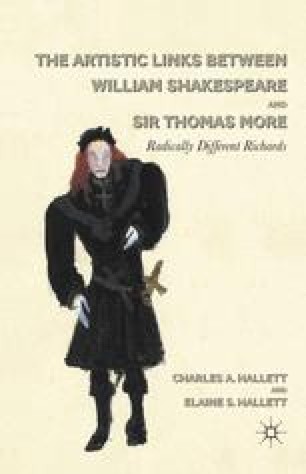 Let us conclude this study of two radically different but infinitely fascinating Richards by re-stating why we chose to focus so emphatically on the final play of Shakespeare’s tetralogy and its bountiful source. From a dramaturgical perspective, Richard III might be deemed Shakespeare’s most important play. Mind you, we don’t say best or greatest (such superlatives are usually reserved for Hamlet, Othello, or Lear). But Richard III deserves special distinction in its own right. The play is important because, in it, Shakespeare comes to understand the essential difference between staged narrative and drama. If he hadn’t written this play, if he had never read Thomas More and come under the influence of Richard, Shakespeare may not have discovered the impact and the potential of the reversal. His entire career would have been different. No other play of Shakespeare is pivotal in this manner.