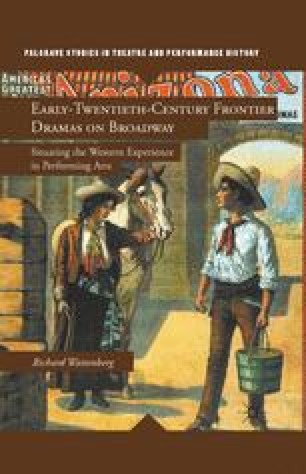 From Melodrama to Realism: William Vaughn Moody’s The Great Divide and Rachel Crothers’s The Three of Us

The appeal of plays dealing with frontier western materials for first-class New York theater audiences an appeal that was evidenced in the 1905–1906 theater season by the outstanding successes of Royle’s The Squaw Man and Belasco’s The Girl of the Golden West continued into the 1906–1907 season. Burns Mantle and Garrison Sherwood list more than one hundred productions for the 1906–1907 season, and of these, four of the seven longest-running productions dealt with the frontier West. The four include: William Vaughn Moody’s The Great Divide, which opened at the Princess Theatre on October 3, 1906, and ran for 238 performances; Rachel Crothers’s The Three of Us, which opened at the Madison Square Theatre on October 17, 1906, and had a run of 227 performances; David Belasco and Richard Walton Tully’s The Rose of the Rancho, another of Belasco’s spectacularly mounted productions, which opened at the Belasco Theatre on November 27, 1906, and ran for 240 performances; and Pioneer Days, “a spectacular drama in three scenes by Carroll Fleming,” which opened at the New York Hippodrome on November 28, 1906, for a run of 288 performances.1 The Rose of the Rancho was not meant to be as broad a spectacle as Pioneer Days, but Belasco’s play abounded in the theatrical wizardry that made him such a success at the turn of the century.

Mining Camp Stage Direction Western Individualism Rugged Individualism York Public Library
These keywords were added by machine and not by the authors. This process is experimental and the keywords may be updated as the learning algorithm improves.
This is a preview of subscription content, log in to check access.

Cite this chapter as:
Wattenberg R. (2011) From Melodrama to Realism: William Vaughn Moody’s The Great Divide and Rachel Crothers’s The Three of Us. In: Early-Twentieth-Century Frontier Dramas on Broadway. Palgrave Studies in Theatre and Performance History. Palgrave Macmillan, New York. https://doi.org/10.1057/9780230119147_7