Cinema, Technologies of Visibility, and the Reanimation of Desire 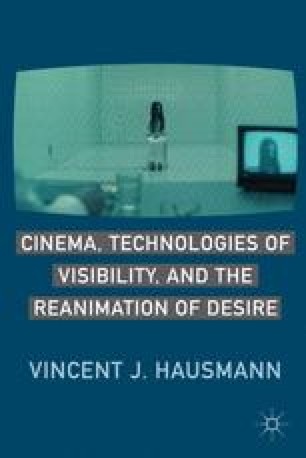 Cinema, Technologies of Visibility, and the Reanimation of Desire pp 199-203 | Cite as

Conclusion: Up with Dead People?

Although they have, of course, been with cinema from the start and remain remarkably resilient, the living dead have recently insinuated themselves more frequently in domains that extend beyond conventional and unconventional horror films. They have found portals, too, in other long-established as well as new technologies of visibility, pathways closely tracked in contemporary film, with its eye intensely trained on an inheritance rendered, or merely more clearly revealed as, unstable in the face of an uncertain present and future for cinema. In many of the films I have explored, the figure of the living dead registers less the complaint of being improperly mourned than of having “had” an earthly life that never really began or that substantively differed from the lifeless, somnambulant condition some films have imagined the dead endure. Lester in American Beauty, livelier in his last moments and in death than during much of his time on earth, finds company with the many dead who, in films such as Kiyoshi Kurosawa’s startling Pulse (2001), return from the grave in part to illumine the relatively more vital, if still troubled, existence they have found away from the corporate cubicles and computer, television, video, and phone screens to which those left behind, like so many in Until the End of the World and The Ring, seem tethered.

Phone Screen Death Drive Horror Film Paternal Function Dead People
These keywords were added by machine and not by the authors. This process is experimental and the keywords may be updated as the learning algorithm improves.
This is a preview of subscription content, log in to check access.