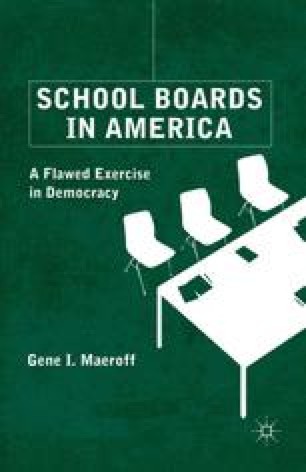 School boards are job machines. This is especially true in some small towns and suburbs, where the school system is a major, if not the largest, employer. School boards perform as gatekeepers in such places, opening doors to lifetime employment, pensions, and health benefits for the chosen few. Jobs are available on all levels as school systems hire not only certificated educators but secretaries, lunchroom workers, teacher aides, security officers, bus drivers, crossing guards, custodians, groundskeepers, and a host of other nonprofessionals. Many such positions do not require a college degree and provide a kind of security seldom found any longer in private sector employment. As a matter of fact, Paul E. Peterson, a government professor at Harvard University, wrote that the number of pupils for each member of the support staff declined from 58 in 1960 to 43 in 1970 to 27 in 2005.1 Jobs on the support staff, in other words, proliferated at a faster rate than enrollment.

School District School System Board Member Collective Bargaining School Board
These keywords were added by machine and not by the authors. This process is experimental and the keywords may be updated as the learning algorithm improves.
This is a preview of subscription content, log in to check access.