The Poetry of Susan Howe 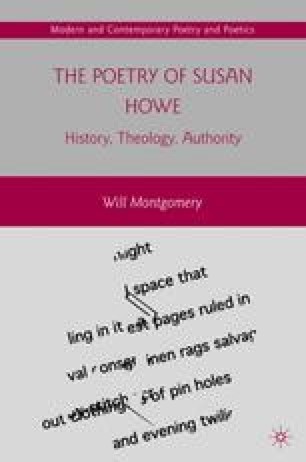 Two key texts, written concurrently, helped to cement Howe’s reputation in the early 1980s. These were Pythagorean Silence (1982) and Defenestration of Prague (1983), originally published separately but later collected alongside The Liberties in The Europe of Trusts (1990) in the Sun and Moon Classics series (subsequently republished by New Directions). Although Howe was by this point corresponding with both Lyn Hejinian and Charles Bernstein, and in this sense loosely involved with language writing, it is immediately evident how different her work was from texts of the same period such as Hejinian’s My Life (1980), Ron Silliman’s Tjanting (1981) or the collaborative publication Legend (1980) coauthored by Bruce Andrews, Charles Bernstein, Ray DiPalma, Steve McCaffery and Ron Silliman. Indeed, her correspondence shows that Howe was skeptical of, if not hostile to, much language writing from the outset.1

Polar Bear Literary History Fictive World Pearl Harbor Male Tradition
These keywords were added by machine and not by the authors. This process is experimental and the keywords may be updated as the learning algorithm improves.
This is a preview of subscription content, log in to check access.