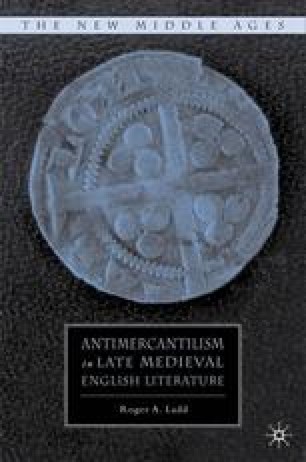 Conclusion: From Finchale to York: Are Merchants Respectable by 1500?

Having traveled this long path through a century of representations of medieval English merchants, it seems appropriate to reflect briefly on what conclusions can be drawn from this analysis. Most importantly, we should recall that while this book suggests a progression from the antimercantilism of William Langland’s Piers Plowman to the promercan-tile charity of the York Mercers’ “Last Judgement,” it would be misleading to argue that antimercantile ideology was in full retreat from emergent mercantilism by the late fifteenth century. Like the static representations of avarice and its moneybags on churches throughout Europe, the literary texts of the late fourteenth century remained relevant cultural texts long after their authors had died. While Gower was primarily remembered for his Confessio Amantis, which avoids the debate over merchants, and Margery Kempe’s Book may not have been widely read, the works of Geoffrey Chaucer and William Langland remained popular throughout the period of this study. Indeed, Northumberland Ms. 455, the manuscript in which the Tale of Beryn survives, presents some of Chaucer’s ambivalence toward merchants alongside the Beryn-poet’s redemptive vision of trade, all within a single reading of the Canterbury Tales. The longer texts are also not entirely about merchants; the debate over the taint of finance is a running theme here, and worth further study, but it certainly is not the only or even most important thing going on in late medieval English literature.

Fifteenth Century Literary Text Discursive Formation Moral Valence Longe Text
These keywords were added by machine and not by the authors. This process is experimental and the keywords may be updated as the learning algorithm improves.
This is a preview of subscription content, log in to check access.