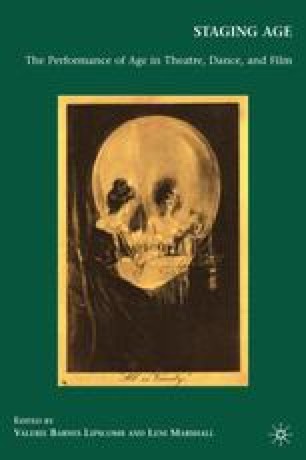 Molière’s miser is old. In fact, Harpagon is one of the oldest characters in all of the thirty or so plays by the seventeenth-century French dramatist.1 He keeps precise count of his age as well as his money, boasting to the matchmaker Frosine that he is sixty years old (j’en ai soixante bien comptés [I am sixty well-counted years old]). A widower, he plans to remarry at the same time he arranges marriages for his two children still living at home. Within the world of Molière’s theatre, Harpagon is one of the obsessed, authoritarian father figures, along with Orgon in Tartuffe, Monsieur Jourdain in Le Bourgeois Gentilhomme, and Argan in Le Malade Imaginaire. The character type comes from the senex (old man) of Roman comedy, whose function is to try, unsuccessfully, to block the wedding plans of a child. In addition, Harpagon seems to be a senex amans (amorous old man), in that he is in love with a woman young enough to be his daughter, and the play encourages the audience to view his “passion as contrary to nature and ridiculous in its appearance” (Sweetser, 115, my translation). In Molière’s plays, the ages of the other fathers remain unspecified, and usually they are portrayed as being in their late forties or early fifties, about the age of Molière when he played the parts. This study examines the relationship between Harpagon’s age and issues of power and desire.

Stock Character Early Fifty Late Forty Precise Count Oedipal Conflict
These keywords were added by machine and not by the authors. This process is experimental and the keywords may be updated as the learning algorithm improves.
This is a preview of subscription content, log in to check access.