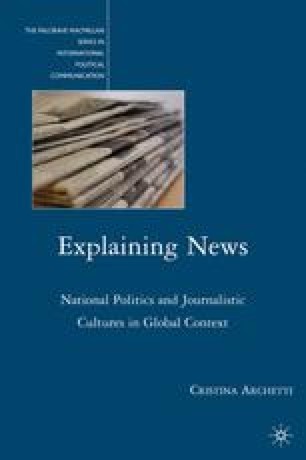 If a researcher was respectively to approach the literature of different fields of study with the same question, “What shapes the news?” he or she would find completely different explanations. Studies in Political Communications, for example, tend to argue that political actors have a major role in shaping a country’s news stories. Scholars of International Communications point at least at three possibilities: for some news is shaped by unbalanced and unidirectional flows between richer and poorer countries, the advocates of globalization support the idea that news is becoming homogeneous on a worldwide scale, supporters of the Localization hypothesis reject the idea of global news in favor of its diversification along cultural, linguistic, or ethnic lines. Research in News Sociology, instead, emphasizes how the news product of each media organization is the unique output of patterns of micro interactions among media professionals and between them and the rest of society.

Political Actor Media Coverage Media Organization News Story Political Debate
These keywords were added by machine and not by the authors. This process is experimental and the keywords may be updated as the learning algorithm improves.
This is a preview of subscription content, log in to check access.