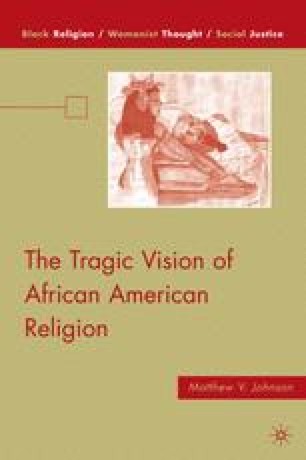 The tragic mood of the African American emerges and crystallizes most clearly in her music and religious expressions. The deep substratum or Dionysian element was supplied by both the rich spirituality of the African heritage and the brutal encounter with the “peculiar institution” in the Americas. The suffering and pain of slavery, as well as the subsequent experience of oppression and marginalization, situated the African American firmly at his existential “limits.” The cultural taxonomies that defined black being, mediated explicitly through language, law, and social status and reinforced implicitly through styles of interaction, intensified the experience of fragmentation that conspired with the basic human desire to be free to create a profound sense of longing (melancholy, conceived of as nonpathological) and the surging Dionysian “Sturm,” kept just beneath the surface by fear and force. Using Du Bois’s tripartite division of the salient features of the liturgical expression of African American consciousness, the music, the frenzy, and the preacher (preacher expanded in this instance to mean mainly “preaching,” although the “person” of the preacher is by no means minimized), I hope to perform something of an excavation, laying bare its dynamic structure.

Christian Faith African Heritage Ritual Context Liberate Experience Great Poet
These keywords were added by machine and not by the authors. This process is experimental and the keywords may be updated as the learning algorithm improves.
This is a preview of subscription content, log in to check access.