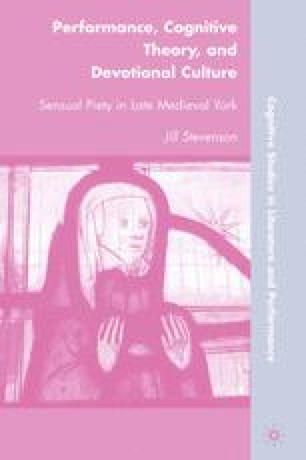 Whether they are discussing mental images, live performance events, or material objects and spaces, time and again writers in the Middle Ages call attention to the sensual nature of seeing, and to the moral, spiritual, and physical implications of that sensuality. Rather than reflecting medieval visual culture and visual piety, the discourse and practices involving images in the later Middle Ages might, therefore, be better understood as revealing medieval sensual culture and sensual piety. W. J. T. Mitchell has argued that the term “visual culture” is inexact because all media are in fact hybrids or mixed-media. Accordingly, he suggests that in analyses of images and their reception scholars should regard the senses as collaborative entities that “activate” one another.1 To some extent and unwittingly, then, Mitchell is arguing for a return to the medieval theories of vision and visual media, which considered the entire sensory effect of an image in discussions of its function, use, and meaning. The full sensory impact of medieval performances and other devotional media has been the subject of the preceding chapters.

Theme Park Preceding Chapter Religious Meaning Mental Adjustment Ferris Wheel
These keywords were added by machine and not by the authors. This process is experimental and the keywords may be updated as the learning algorithm improves.
This is a preview of subscription content, log in to check access.