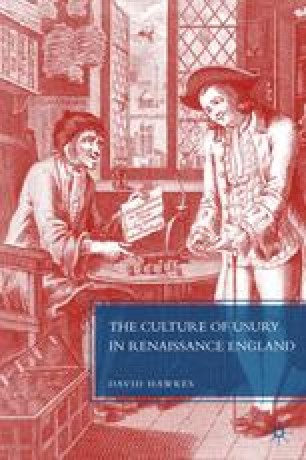 “Howe is the Worlde Chaunged”: The Emergence of Usury

Four or five hundred years ago, the people of England became convinced that an aggressive, evil, supernatural force was active among them. It was visibly damaging traditional social relations and disrupting the ways of life to which people had long grown accustomed. It was also perceived to be working within the individual psyche, causing epidemic melancholy and madness, and producing selfish, antisocial patterns of thought and behavior. Sixteenth- and seventeenth-century literature and theology often personified this power, imagining it as a perverted humanoid bent on malicious destruction. This is the era of the witch hunts, in which the power of “Satan” was assumed to be tirelessly at work, aggressively soliciting entry to the minds of individuals. The people of early modern England loathed and feared this power with all their being, but the reasons for their hatred and terror may not be immediately obvious to us. For the real object of their horrified revulsion was a power that has become intimately familiar today, and it is so well known to us that it is widely accepted, even greeted as a friend. What the people of Renaissance England feared was the efficacious power of signs. This chapter will examine their shock and dismay as they first began to acknowledge the rise of that power.

Seventeenth Century Objective Effect Conspicuous Consumption Early Modern Period English People
These keywords were added by machine and not by the authors. This process is experimental and the keywords may be updated as the learning algorithm improves.
This is a preview of subscription content, log in to check access.