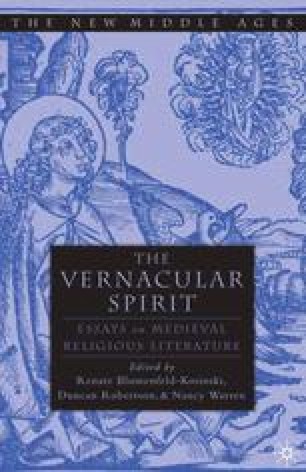 Beginning around 1150, there appear a handful of Old French religious texts intended for the audience of the secular courts, usually described as vernacular paraphrase and exegesis of Scripture.1 These texts make up one of the most neglected aspects of the study of twelfth-century French literature. The neglect is all the more surprising, as our phenomenological understanding of the explosion of vernacular literature in this period is still in its infancy: Why was there suddenly such avid interest in written versions of the stuff of vernacular poetry? Why does the vernacular transmission of religious doctrine establish itself at the same time, despite orthodox resistance, as a new vehicle for a layman’s access to Scripture? These developments occur in an environment in which the notion of literacy is all but synonymous with the social distinction of clerical orders, in which textual production is still the exclusive province and prerogative of monastic scriptoria, and the great majority of secular literary “classics” are thought to have been composed by clerics.2 It follows that the handful of texts that themselves claim to “translate” Scripture for the use of the layman should have much to reveal that bears upon these larger questions, and yet these texts have seldom been studied in their own right.3 I am not speaking here of the corpus of legenda, lives of saints and other holy figures; these had a longer tradition of serving jointly as laymen’s entertainment and religious edification. My concern is with texts that aspire to offer a lay public the experience of the cleric’s reading, that present the reading of Scripture— in the many ways this could be understood—in the vernacular.

Biblical Text Verbal Pair Religious Edification Vernacular Literature Ular Adaptation
These keywords were added by machine and not by the authors. This process is experimental and the keywords may be updated as the learning algorithm improves.
This is a preview of subscription content, log in to check access.