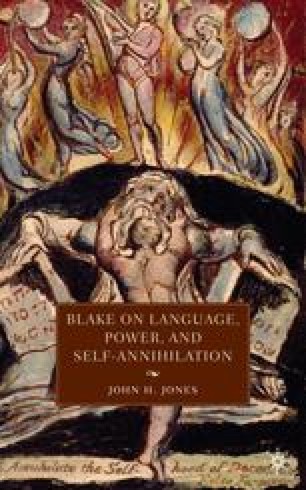 The Annihilation of Authorial Selfhood
Chapter

If Urizen develops the abuses that authorial power can exert over texts and audiences and the problems that arises from those abuses, as I have discussed in the previous chapter, Milton considers the possibility of avoiding and undoing those abuses. As the preface to Milton clearly indicates, Blake is deeply concerned with the creative process and whether inspiration can be restored with the restructuring of communication: “The Stolen and Perverted Writings of Homer & Ovid: of Plato & Cicero, which all Men ought to contemn: are set up by artifice against the Sublime of the Bible. but when the New Age is at leisure to Pronounce; all will be set right: & those Grand Works of the more ancient & Consciously & professedly Inspired Men, will hold their proper rank, & the Daughters of Memory shall become the Daughters of Inspiration” (M 1, E 95). The preface considers two modes of creativity, one associated with memory and the other with inspiration. Memory, as a source of creativity, is, according to Blake, a negative element associated with classical models, theft, and perversion that has gained prominence over inspiration. Blake elaborates on this idea in other writings, indicating the importance it has in his thinking. In a passage on the drawings of Thomas Williams Malkin, for example, Blake writes, “A plagiary … works only from memory,” and in A Vision of The Last Judgment, he argues that while “Fable or Allegory is Formd by the Daughters of Memory,” “Imagination is Surrounded by the daughters of Inspiration” and produces an “Eternal Vision … of All that Exists” (E 693; VLJ, E 554).

Creative Process Title Page Arbitrary Sign Eternal Life Plural Pronoun
These keywords were added by machine and not by the authors. This process is experimental and the keywords may be updated as the learning algorithm improves.
This is a preview of subscription content, log in to check access.