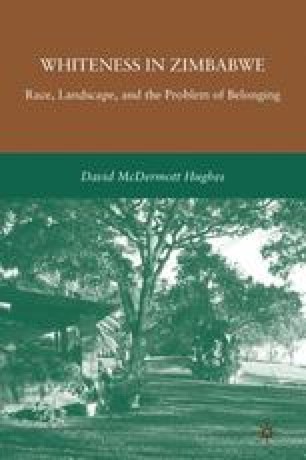 After independence, white farmers accepted an implicit and somewhat incoherent offer from the Zimbabwean state — one quite favorable to themselves. Whites had foreseen retribution, rather than reconciliation, and almost two-thirds of the total population emigrated in the 1980s.1 Their fears were not misplaced. After all, whites had supported the old regime — the Rhodesian Front and its loyal, legal opposition — almost to a person.2 This conservative consensus distinguished Rhodesia from its neighbor across the Limpopo, where many whites resisted the state and suffered violent retribution. As compared with the clearly pluralist African National Congress, Rhodesian whites played almost no role in Zimbabwe’sguerrilla groups.3 There was no equivalent to South Africa’sEnd Conscription Campaign either: disaffected draftees merely emigrated. Meanwhile, men of all ages responded sheeplike to increasingly frequent military call-ups — only, in some cases, repudiating their military service postbellum,. Bruce Moore-King’swar memoir, for instance, blamed “the Elders” for deceiving his “scarred generation.” “Call yourself Zimbabwean, with all that word means,” he urged his co-ethnics, “and set about rebuilding our war-ravaged homeland” (Moore-King 1988:132).

Land Reform Communal Land Farm Owner White Farmer Rural White
These keywords were added by machine and not by the authors. This process is experimental and the keywords may be updated as the learning algorithm improves.
This is a preview of subscription content, log in to check access.