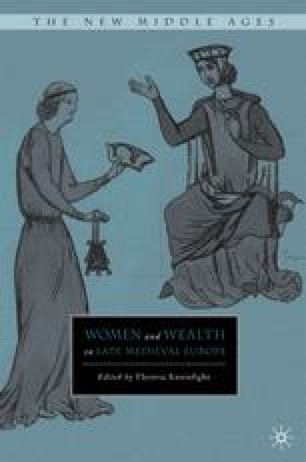 Historical analyses of women, wealth, and power in the Middle Ages frequently address the concrete realities of one or a few elite women’s access to and use of wealth, focusing on how the power that wealth bestowed intersected with the other legal and cultural limitations that medieval women faced. Especially prominent in such discussions are queens and abbesses, women who possessed significant access to wealth and other bases of power, and who left behind the most detailed records for historians to mine. This volume includes a number of nuanced examples of this approach: Theresa Earenfight’s examination of how María of Castile, Queen-Lieutenant of the Crown of Aragon, grappled with her husband’s encroachments on the queen’s traditional sources of income; Núria Silleras-Fernández’s account of the rise and fall of another queen of Aragon, the former concubine Sibil·la de Fortià; Helen Gaudette’s reconstruction of the building projects of Queen Melisende of Jerusalem; and Ana Maria S. A. Rodrigues and Manuela Santos Silva’s scrutiny of how the medieval queens of Portugal used their income to extend royal power generally, rather than strengthen their own.

National Archive Fifteenth Century Family Identity Property Claim Property Conflict
These keywords were added by machine and not by the authors. This process is experimental and the keywords may be updated as the learning algorithm improves.
This is a preview of subscription content, log in to check access.