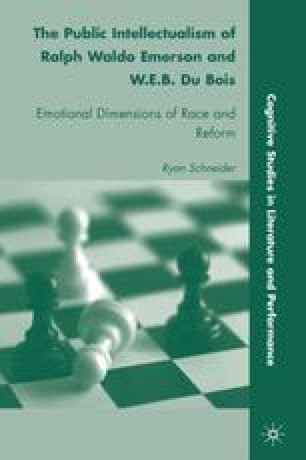 Before I explain what this book is about, I am going to list some of the similarities—a few bordering on the uncanny—that mark the personal and professional lives of Ralph Waldo Emerson and W.E.B. Du Bois: similarities all the more striking given the differences in their racial subject positions and eras of intellectual emergence. Both were natives of Massachusetts and grew up in nearly all-white communities. Both were raised in financially strapped households, and, for the most part, lacked the presence of a father or father figures. Each attended Harvard College on scholarship (Du Bois also earned a PhD, the first African American to do so), and both presented reform-themed formal addresses to Harvard students and faculty. They survived debilitating illnesses as young adults; they trained for and then left the security of established professions; they suffered the losses of their first wives; and they endured the deaths of firstborn sons, each writing publicly about the experience. Both also edited periodicals that became lightning rods for controversy (Du Bois’ The Crisis more so than Emerson’s The Dial); formulated concepts of double consciousness that gained notice from their contemporaries as well as current scholars (again, Du Bois’s more so than Emerson’s); and composed historical-biographical narratives of individuals they regarded as representative or heroic figures (John Brown received attention from both).

Public Intellectualism Authorial Audience Fictional Narrative Narrative Strategy Black Folk
These keywords were added by machine and not by the authors. This process is experimental and the keywords may be updated as the learning algorithm improves.
This is a preview of subscription content, log in to check access.