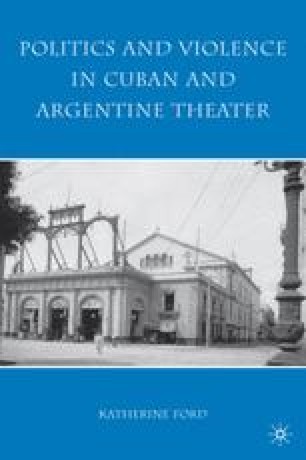 Dos viejos pánicos (1968) from Vigilio Piñera (1912–1979) explores the violence inherent in the repetition of everyday existence by portraying a routine day in the life of a sixty-year-old married couple. The quotidian violence that characterizes the couple’s lives is provoked by fear. Piñera’s characters, Tota and Tabo, represent a domestic dispute that mirrors the spectacality of the political context that was taking place in Cuba offstage in the late 1960s. This violence is sparked by a fear that characterizes Tota and Tabo’s existence and comes between them and the outside world. Their fear is triggered by the knowledge that everything about them—including their intimate secrets—is known by another. This comprehensive fear is embodied in a planilla the couple is forced to confront in the second act. The planilla, in Dos viejos pánicos, is a governmental survey that becomes the personification of fear for the middle-aged couple. Their violence against one another and against the outside world can be witnessed in their struggle with, and attempted elimination of, this very planilla. The internal world of Tota and Tabo reflects the national context (that of Cuba in the late 1960s, but also the larger Latin American political and social context) and portrays a growing fear and the violence that it provokes. The small, claustrophobic existence that the couple describes is doubled by the political events that surround the writing of Dos viejos pánicos, a context in which the spectacularity is mirrored by Piñera’s work.

Domestic Dispute Cuban Revolution Revolutionary Government Everyday Existence Violent Repression
These keywords were added by machine and not by the authors. This process is experimental and the keywords may be updated as the learning algorithm improves.