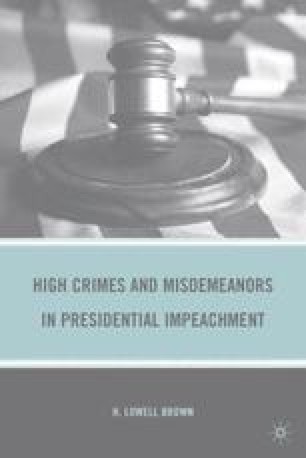 When the constitutional convention considered the question of presidential impeachment, and as grounds therefore “high crimes and misdemeanors,” the delegates had a breadth of experience upon which to draw. Impeachment, as derived from English parliamentary practice, had been advocated by Josiah Quincy and John Adams even before independence as a means of holding the crown’s colonial government accountable for what they believed were abuses of official authority. The arguments of Quincy and Adams were grounded firmly in English parliamentary impeachment history as reported by Cobbett, Hatsell, Howell, Salmon, and Seiden. This practice established high crimes and misdemeanors as referring to the official misconduct of public officials in derogation either of their offices of trust or of an act of Parliament, or otherwise as being contrary to the interest and security of the nation.

Public Trust Original Meaning High Crime East India Company Federal Constitution
These keywords were added by machine and not by the authors. This process is experimental and the keywords may be updated as the learning algorithm improves.
This is a preview of subscription content, log in to check access.