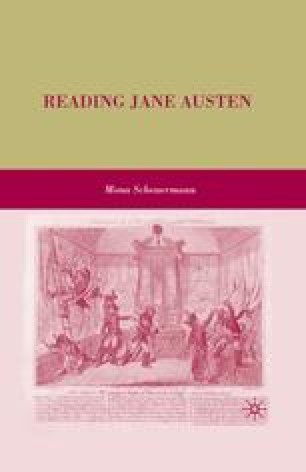 “So Long as It be a German Play”
Chapter

The young people at Mansfield Park—with Edmund and Fanny abstaining—decide to put on a play, and the moral seriousness with which this decision is met by these two arbiters of proper behavior has puzzled many later readers of the novel. Why indeed do Edmund and Fanny make such a fuss about this plan, and why do their objections become even more strenuous once the play to be performed actually is chosen? If the novel as a whole elicits puzzlement in many modern readers, the episode of the theatrical performance stands out as seeming particularly heavy and exaggerated. Yet as soon as we place it within its contemporary context, all difficulties I think are resolved. This chapter will explore just this context by looking at the comments of Austen’s contemporary Hannah More on the effects of precisely the sort of writing that attracts the group. After that, I will look at Lovers’ Vows, the play proposed for presentation, and finally I will talk about the episode within the context of the novel itself. What we shall see is that Austen presents precisely the conservative moral agenda that was typical of her class. There is no mystery here, and it is certainly not the case that “Austen’s enterprise in Mansfield Park is to turn conservative myth sour,” as one critic insists.1

Young People Emotional Abuse Moral Worth Modern Reader Family Circle
These keywords were added by machine and not by the authors. This process is experimental and the keywords may be updated as the learning algorithm improves.
This is a preview of subscription content, log in to check access.