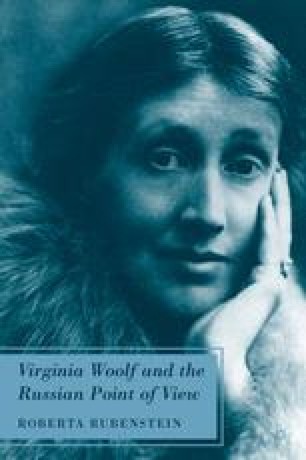 Dostoevsky: “The dim and populous underworld”

Of the major Russian writers, it was Dostoevsky who prompted Virginia Woolf’s most intense and most ambivalent responses, ranging from fascination with his representations of consciousness and grasp of psychological complexity to dissatisfaction with what she regarded as his indifference to form. Analogous to Orlando’s infatuation when he first encounters the Russian princess Sasha on the frozen Thames, Woolf’s infatuation with Dostoevsky must be understood in the context of the mystique surrounding the writer during his early years in the British reading experience. During the period of heightened interest in Russian writers in translation that bracketed the First World War, a veritable “cult” of Dostoevsky developed. According to Helen Muchnic, this trend, which occurred between 1912 and 1921, was a “complex intellectual phenomenon, composed partly of war-time sympathies, partly of mysticism, partly of a new interest in abnormal psychology and in the revelations of psychoanalysis, partly of an absorbed concern with artistic experimentation. Dostoevsky represented an ally, a mystic, a psychologist of the unconscious, a designer of a new fictional form” (Dostoevsky’s English Reputation 5–6). Gilbert Phelps elaborates that “the other influences of the period—Bergson, Freud, French Impressionism, Symbolist Poetry and many others, all making for the break-up of the old water-tight concepts of human consciousness and human behaviour, came to a head at about the same time, and gave Dostoevsky’s novels an almost miraculous appearance of having concentrated into themselves the profoundest issues of the day” (The Russian Novel in English Fiction 171).

Prime Minister Emotional Intensity Major Character English Reader Populous Underworld
These keywords were added by machine and not by the authors. This process is experimental and the keywords may be updated as the learning algorithm improves.
This is a preview of subscription content, log in to check access.