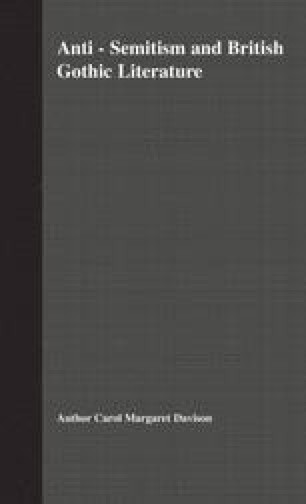 Cabalistic Conspiracies and the Crypto-Jew

According to the Marquis de Sade, Gothic fiction was ‘the inevitable outcome of the revolutionary upheavals experienced throughout the whole of Europe’. In order to compete with the cataclysmic events of the 1790s, Gothic novelists had ‘to call upon the aid of hell itself’ (109). While several Gothic novels in England pre-dated these upheavals, it is unarguable that two particular forms of terror in the 1790s — one historical, the other fictional — were distilled into the stuff of which British nightmares were made, thus providing this genre with an unprecedented blood transfusion. News of the notorious Kannibalregiment Terror in France involving the September massacres (Brinton: 177) and the cannibalistic buveurs du sang (Singer: 163) — as the Terrorists were referred to by their enemies — set the stage for a revitalized brand of British Gothic fiction.1 This was combined with the popularly welcomed entry of the German terror-novel (Schauerroman), which blended ‘political and magical ingredients’ and focused on ‘the activities of powerful secret societies’ (Tompkins: 281). Plagued by ‘domestic unrest [and] fears of invasion from abroad’ (Punter, Literature: 61), Britain was particularly susceptible to this onslaught of terror. As E.P. Thompson relates, ‘In 1797 the invasion scare was growing, armed loyal associations and volunteer corps were formed, as much against internal conspiracy as against the French.’

French Revolution Conspiracy Theory Secret Society Cataclysmic Event Jewish Naturalization
These keywords were added by machine and not by the authors. This process is experimental and the keywords may be updated as the learning algorithm improves.

All the misfortune of the modern world, if it is traced to its furthest roots, comes manifestly from the Jews, they alone made Bonaparte emperor.