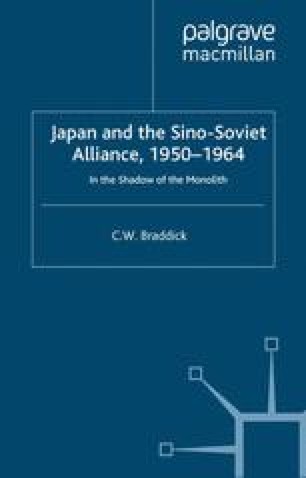 Leaning to one side: Japanese diplomacy and the Sino-Soviet Alliance, 1950–60

The origins of the Cold War lay not in the post-war division of Asia but in superpower disagreement over the future of Europe. Stalin’s demand for a strategic buffer zone to prevent another invasion from the West caused President Harry Truman to respond with a policy of containment and deterrence. To this end, the US concluded a series of alliances aimed at preventing the spread of Communist power, resulting in much of the world being divided into two antagonistic blocs. Each superpower was able to exploit its hegemonic status to impose loyalty within its own bloc: increasing the costs of defection by encouraging economic and strategic dependence.

Foreign Policy Foreign Minister China Issue Peace Treaty Diplomatic Relation
These keywords were added by machine and not by the authors. This process is experimental and the keywords may be updated as the learning algorithm improves.
This is a preview of subscription content, log in to check access.