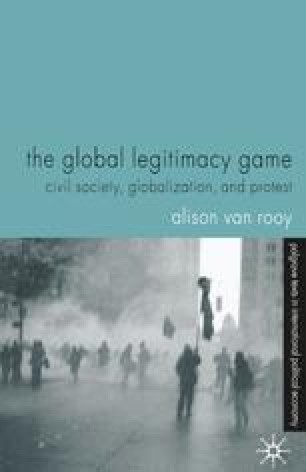 The biggest social movement in decades? I think so. This chapter highlights the 1990s as a bumper decade for international activism. Social movements, unions, NGOs, churches, advocacy organizations, professional associations, and other CSOs spent those ten years (and more) rocking some pretty big boats on the seas of global governance: the IMF, the World Bank, and the WTO (not to mention Nestle, Nike, and Monsanto) have all backed down on a number of initiatives in part because of CSO pressure. Even amid numerous failures, these ‘civil society’ successes have been visible enough to have changed some of the rules our world lives by.

Civil Society Debt Relief Global Civil Society Nuclear Disarmament Peace Movement
These keywords were added by machine and not by the authors. This process is experimental and the keywords may be updated as the learning algorithm improves.

Consistently underplayed in the Western media, sneered at by politicians and opinion formers, it has been variously dismissed. Some see it as a bunch of rabid anarchists smashing windows for a laugh. Others as middle-class do-gooders denying the poor the benefits of trade. Others still as NGOs buoying up their bank accounts by twisting the facts about the realities of globalisation.

It is none of these things. It is, in fact, the biggest social movement in decades; a truly global, if at times frail, unity of peoples, experiences and world views bound together by an awareness that the corporate infiltration of every area of life is a process of exclusion, homogenisation, environmental destruction and, for many, death (Kingsnorth 2001: URL).