Sociology, Science, and the End of Philosophy 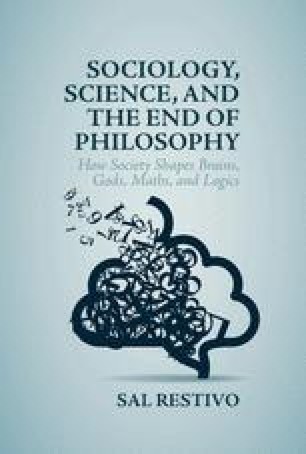 Sociology, Science, and the End of Philosophy pp 1-30 | Cite as

Alfred North Whitehead described Western philosophy as a series of footnotes to Plato. Plato’s ideas on the brain and mind, on God and the gods, and on logic continue to echo in the hallways of the neurosciences, theology, and logic even as both the neurosciences and social sciences give us reasons for forgetting Plato. My goal is to show why sociology and anthropology change everything about how we should understand these phenomena. Brains, gods, maths, and logics are human creations manufactured in social and environmental settings out of the materials of the everyday world and the symbols of everyday culture. Sociology and anthropology reject transcendence and thus eliminate Plato and God from our conversations. This book, like my career, has unfolded in the context of postmodernism(s). It exemplifies what Randall Collins has called “non-obvious sociology,” and what is known in social studies of science as the sociology of the “hard case.” My perspective on sociology owes much to Mills’ “the sociological imagination” and Collins’ “sociological cogito.” The topics I cover – brains, gods, maths, and logics – all share the quality that they seem today or have seemed historically to be independent of social, cultural, and historical forces. The topics can also be viewed as coming under the umbrella of social facts that become visible once we, with Emile Durkheim, reject transcendental, immanentist, and psychologistic explanations of human behavior.