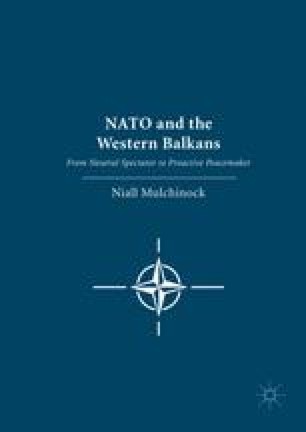 In ‘Kosovo – NATO’s War (1998–99)’, Mulchinock analyses in detail the response of the alliance to Slobodan Milosevic’s policies of ethnic cleansing in this contested province at the end of the 1990s. In the opening section of the chapter, he looks at Kosovo’s volatile history and how these historical grievances were utilised by Milosevic in his rise to power at the end of the 1980s. Moving a decade forward, he shows how NATO played a more dominant role in the initial phases of the Kosovo crisis in 1998. What factors encouraged an earlier military response in March 1999? Why did this particular military operation prove to be so testing for the alliance? This is considered from the perspective of member state positions during the bombing campaign.

Security Council Military Action Foreign Minister Security Council Resolution Clinton Administration
These keywords were added by machine and not by the authors. This process is experimental and the keywords may be updated as the learning algorithm improves.
This is a preview of subscription content, log in to check access.