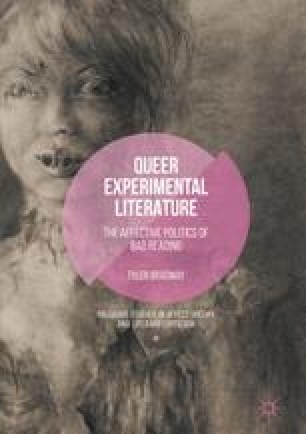 The Languages of the Body: Becoming Unreadable in Postmodernity

This chapter extends the book’s analysis of how queer experimental literature refashions deconstructive reading, focusing on how deconstructive aesthetics—and their use by the avant-garde—became gentrified by neoliberalism. I trace Kathy Acker’s turn from deconstructive aesthetics toward a sensuous “language of the body,” which she hoped would make her texts “unreadable” within the established hermeneutics frameworks of postmodernism. Through Bodies of Work and In Memoriam to Identity, I reveal how Acker’s conception of bad reading—in which literature stimulates a masturbatory encounter with queer becoming—recovers the political agency of queer aesthetics.

Experimental Aesthetics Original Emphasis Symbolic Order Late Capitalism Experimental Writing
These keywords were added by machine and not by the authors. This process is experimental and the keywords may be updated as the learning algorithm improves.
This is a preview of subscription content, log in to check access.