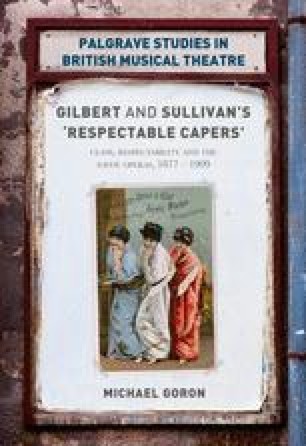 Respectability was harder to achieve in the theatrical sphere than in other professional fields. The theatre had little formalised career regulation, was tainted in the public imagination with immorality, and suffered, in terms of public perception of its propriety, from the rather indefinable social status of its inhabitants. The attempts of some theatre practitioners to acquire and demonstrate the trappings of respectability (or to display what they might have considered to be their innate respectability) described throughout this book exhibit a desire to redress this perceived inequality in public acceptance. In his attitudes towards theatre-making, Gilbert was reflecting and reasserting current bourgeois ideology. In their collaborative assent, cooperation and therefore tacit assertion of these principles, Sullivan and Carte were following the same line.

Daily News Young Lady Theatrical Sphere Musical Theatre Theatre Practitioner
These keywords were added by machine and not by the authors. This process is experimental and the keywords may be updated as the learning algorithm improves.
This is a preview of subscription content, log in to check access.