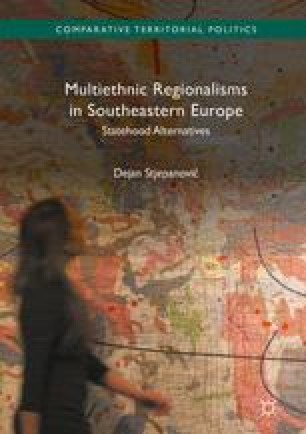 Vojvodina in Serbia: The Politics of Multinational Regionalism

This chapter analyses the politics of regionalism in Serbia’s autonomous province of Vojvodina since 1990. The main focus is on one regionalist party, the League of Social Democrats of Vojvodina (LSV), but the chapter also considers the regionalist wing of the state-wide Democratic Party (DS) as well as the main Hungarian minority party. Stjepanović identifies the lack of a truly regionalist historiography, strong and rather static groupness, and a relatively homogenous economic structure across the region resulting in a multinational regionalism. Vojvodina’s regionalism is a mixture of a particular understanding of Serbian history that is not shared by all communities (and from which it seeks legitimacy), the multiethnic character of the territory, and a strong economic interest in having self-regulated fiscal competences supported by an overwhelming majority of Vojvodinians but without a dominant regionalist party.