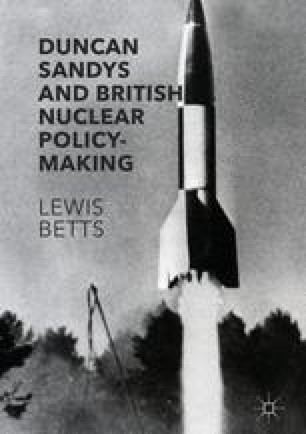 In August 1952 Sandys took it upon himself to question the official government belief that the recent spate of UFO sightings were merely a ‘product of mass psychology’. He accepted that there was no evidence of ‘flying saucer aircraft’ as such, but felt that there was, nonetheless, ‘ample evidence of some unfamiliar and unexplained phenomenon’. The situation seemed familiar to Sandys, who had spent a large part of the Second World War tracking the development of equally unfamiliar phenomena that turned out to be unmanned German weapons, and then having to coordinate the defensive efforts against them. He felt the evidence of there being something concerning was ‘quite as convincing as the half dozen vague and wholly inaccurate reports of the V.2 which was all that we had to go on in the Spring of 1943’. Furthermore, he recalled that in 1943 the response had been ‘all our leading scientists declared [such things] to be technically impossible’. His recollection of what ‘all our leading scientists’ had thought in 1943 was slightly inaccurate but, as the Minister of Supply, Sandys was responsible for equipping the Armed Forces with the latest weapons, and he was inclined to ‘have no doubt at all’ that a British pilot in Germany had witnessed a ‘phenomenon similar to that described by numerous observers in the United States’ rather than settle for an official verdict that might have placed Britain at a material disadvantage.1

Scientific Controversy Official History Nuclear Weapon State Defensive Effort Weapon Development
These keywords were added by machine and not by the authors. This process is experimental and the keywords may be updated as the learning algorithm improves.
This is a preview of subscription content, log in to check access.