Urbanization and Urban Governance in China 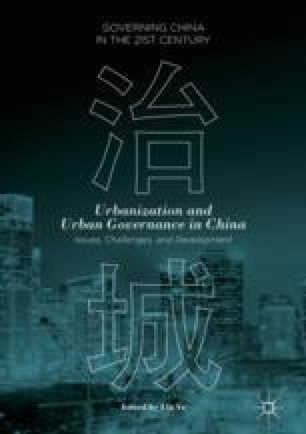 Urbanization and Urban Governance in China pp 1-9 | Cite as

Introduction: A New Path of Urbanization and Urban Governance in China

China has undergone a remarkable process of urbanization since the mid-1980s. The speed, scale, and size of this process has received world-wide attention (LeGates 2014; Savitch et al. 2014). Figure 1.1 shows the growth of the urban population in China between 1950 and 2015. In 2011, China’s urban population exceeded the rural population for the first time in the country’s history. In 2015, over 56% of the total population in China resided in urban areas. The rapid reduction of the rural population since 1995 occurred for two reasons. The first is the vast number of migrants moving from the countryside to cities. The second is so-called “localized urbanization” (jiu di cheng shi hua), which refers to the phenomenon whereby rural residents obtained urban household registration after the collectively owned village land was taken over by the municipalities. In both cases, it is difficult for these previously rural residents to receive equal social welfare as urban residents, which poses a significant challenge for urban management (Ye 2011).

Urban Governance Town And Village Enterprises (TVEs) Extended Metropolitan Regions (EMRs) Shanghai Model Fiscal Capability
These keywords were added by machine and not by the authors. This process is experimental and the keywords may be updated as the learning algorithm improves.
This is a preview of subscription content, log in to check access.