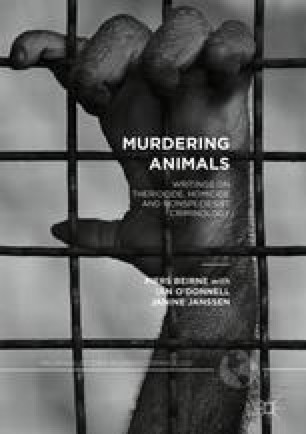 On the Geohistory of Justiciable Animals: Was Britain a Deviant Case?

This chapter begins with the mysterious image of a cat hanged in 1554 London and investigates whether this particular hanging was similar in nature to the extensive medieval and early modern animal prosecutions in continental Europe reported on by the historian E.P. Evans. It examines the adequacy of Evans’ claims about the periodicity, the geography and the meaning of animal prosecutions. The existence of deodands notwithstanding, no evidence is found of any animal trials in the British Isles. The chapter warns that the power of medieval criminal law to punish animals has been usurped by the bureaucratic regulations attached to the circumstances in which animal shelters and animal control officers put animals to death.

Chapter  3 is a quite different project from those that originally appeared in Beirne (1994) and Beirne (2011).

He that kills another’s ox, sins, not through killing the ox, but through injuring another man in his property. Wherefore this is not a species of the sin of murder but of the sin of theft or robbery.

The idea that animals can engage in crime was energetically espoused by late nineteenth-century criminal anthropologists, who sought support from Darwin’s claim in Descent of Man that those with the worst moral dispositions revert to a savagery from which we are not far removed.110 This idea was pursued by the Italian prison doctor Cesare Lombroso, whose demarcation in 1876 of Homo criminalis from Homo sapiens was based on his notion of the born criminal. In a self-described Archimedes moment, the source of criminality was revealed to Lombroso during his postmortem analysis of the skull of a notorious brigand: ‘I instantly perceived that the criminal must be a survival of the primitive man and the carnivorous animals.’111

Lombroso employed anthropometry to claim that born criminals exhibit a constellation of atavistic, ape-like features. After this discovery, he and his disciples next explored the range of species that might be characterized as criminal. Most agreed on the need to start with intelligent animals, common criminal examples of whom were said to be murdering hawks, rogue elephants, lazy beavers, thieving monkeys, wild goats, robber bees and sparrows. In associating criminality with animality, Lombroso himself held that in the search for the origins of crime one might need to go as far back as the lives of various insectivorous plants.112

The English eugenicist Havelock Ellis disagreed, reasoning that one could scarcely hope to find genuine vegetable criminals because to be criminal ‘the deed must be exceptional in the species, and must provoke a social reaction among the other members of that species’.113 In seeking the atavistic origins of crime, some even suggested that, like Homo criminalis, animals could be born criminals; others argued that the laws of criminal heredity applied equally to humans and animals. William Ferrero divined that almost every form and variety of human crime is found among animals, though he distinguished between animals who harm other animals in the course of the struggle for existence, which is not crime, and those who harm or even murder members of their own species, which is.114 Some Lombrosians insisted animals can and do commit crimes against other animals.115

If animals can commit crime, then it is only a short step to claiming either that human criminals are animals or, more weakly, that human criminals have animal characteristics. In Crime: Its Causes and Remedies, Lombroso reasoned that the atavism of born criminals may go back ‘far beyond the savage, even to the brutes themselves’—facts which prove ‘the most horrible crimes have their origin in those animal instincts of which childhood gives us a pale reflection’.116 At times, he and his followers posited that violent men always had animal instincts, at others that they erupted only with the presence of further inhibition-loosening anomalies such as epilepsy. Some even claimed that criminals were zoophiles (perhaps a Victorian circumlocution for bestiality). Lombroso himself suggested that animals commit crime in the same factual, albeit unconscious, way as members of a mob.117 On this point, at least, the Lombrosians stood on the same ground as theorists of crowd psychology, including committed anti-Lombrosians such as the French sociologist Gabriel Tarde, who referred to crowds and mobs as feminine, fickle and beastly.

Lombrosian criminal anthropology wielded intellectual and social power in Europe from the mid-1870s until roughly the beginning of the 1914–18 war. Its rise and fall have been much studied.118 In the United States Lombrosianism exerted considerable influence well into the 1930s; its ideology contributed to the passage of sexual sterilization laws and their accompanying tragedies.119