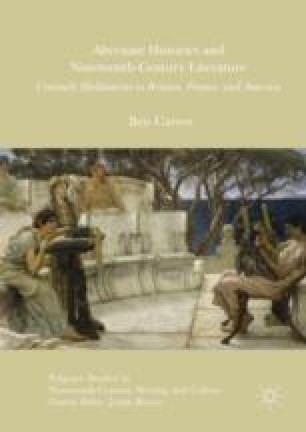 Twentieth-century works of alternate history demonstrate the coalescence of counterfactual historical narratives and science-fictional presentations of infinite historical variations. Stories by Borges and Philip K. Dick’s novel, The Man in the High Castle (1962), exemplify the latter tendency, while counterfactual speculations by historians on the bicentennial anniversary of Waterloo are examples of the former. Works of alternate history in the nineteenth century differed in their combination of the timescales of literary formats—for instance the historical romance and the lost-world narrative, evolutionary theory , and journalistic reportage—with the new chronologies of emergent disciplines of knowledge and techniques of writing. These “untimely meditations” in the nineteenth century explored the disjuncture of these older and newer timescales, and illuminate the way writers in the nineteenth century encountered the past.

Infinite World Alternative History High Castle Evolutionary theoryEvolutionary Theory Counterfactual Speculation
These keywords were added by machine and not by the authors. This process is experimental and the keywords may be updated as the learning algorithm improves.
This is a preview of subscription content, log in to check access.