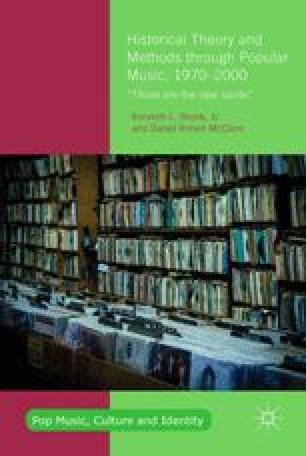 This chapter examines the rise of hip-hop as a conjunction of Jamaican sound system culture and African American music and poetry traditions. Fused together by a vibrant youth culture amidst the austerity postindustrialism, hip-hop emerged from the deindustrialized area of the South Bronx in New York City. The post-Civil Rights era of white flight and capital flight combined with a federal shift away from the War on Poverty programs (seeking to alleviate poverty) to the War on Drugs (a policy aimed toward eradicating illegal drugs, but ultimately disproportionately targeting youths of color. Amidst this material austerity, early hip-hop pioneers created a “do it yourself” patchwork of technology and musical aesthetics that evolved into the apparatus of hip-hop: turntables, samplers, and other technology to music﻿ally﻿ express themselves. By the 1980s, urban crime tales emerged as narratives, informed by the heavy State policing of black and Latino neighborhoods caught up in the war on drugs just as hip-hop’s popularity expanded into the mainstream.