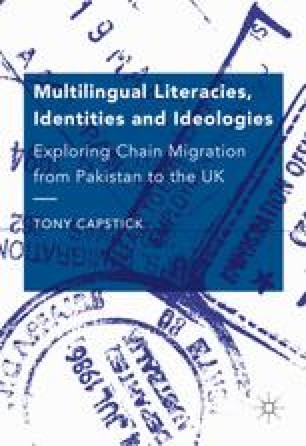 This book is the result of work I have carried out as a researcher, teacher trainer and language adviser in Pakistan and the UK. It emerged from several research projects which I was involved in from 2008 to 2013. Initially, I explored language and literacy in the lives of a Pakistani family in north Manchester, UK. Taking the opportunity to extend this study by travelling to Pakistan with them for three months in 2009, I then decided to stay in Pakistan for 12 months to work at the British Council. During that time I travelled across the country for work and formally carried out a study (Capstick 2011) of English language learning for prospective migrants from Azad Kashmir. In this study, I contrasted the educational experiences of English language learners and their access to English, Urdu and Mirpuri Punjabi. The reason for choosing this approach was to begin exploring the role of language and literacy in the chain migration which has developed between this part of Azad Kashmir and the northwest of England. By tracing access to English language courses and tests, the study demonstrated that English contributes to family life at a time when the West is experiencing a tightening of the relationship between language, immigration, citizenship and national security (Blackledge and Creese 2010; Cooke and Simpson 2008). Since the 9/11 attacks in the US, there has been increased scrutiny of Muslims entering the UK and a conflation of English language proficiency with social integration. The aim for the follow-up study, which was to form the basis of my PhD in Applied Linguistics, was to extend this small-scale research by exploring the role of all the languages and literacies in Mirpuri migrants’ repertoires and to pin down what roles these translingual practices play in the chain migration between Mirpur and northwest England.

English Language Learner Literacy Practice English Language Proficiency Critical Discourse Analysis Language Practice
These keywords were added by machine and not by the authors. This process is experimental and the keywords may be updated as the learning algorithm improves.
This is a preview of subscription content, log in to check access.