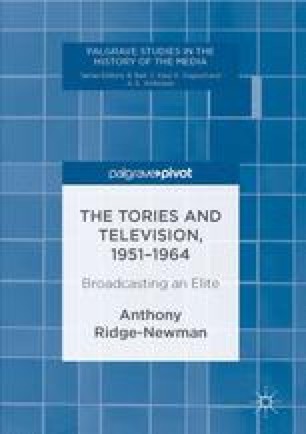 Chapter 6 focuses on analysing marked changes in Macmillan’s Conservatives before and after the 1959 election. It argues that the party’s organizational culture continued to adapt in line with advances in wider television culture and that the party underwent transformation post-election. Laying ground for the major theme of  Chapter 7, this chapter argues that Macmillan’s Conservatives underwent rapid organizational changes resulting in a more professionalized and television centric party. Key drivers of organization change in Macmillan’s Conservatives include the post-Suez empowerment of broadcasters, realization by political elites that TV production could not be controlled by parties, instincts and choices of leaders like, for example, Edward Heath, in key mediatory roles, increased familiarity with the medium by 1959 and insights and experiences from the 1959 election.