The Concept of Truth in International Relations Theory 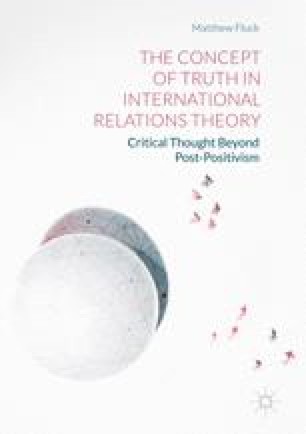 This chapter charts the development of Post-Positivist International Relations (IR) theory from the work of early Critical Theorists through to the anti-foundationalism of Poststructuralists. The differences between Critical Theorists and Poststructuralists can be understood in terms of a division between ‘Veriphiles’ and ‘Veriphobes’. Despite this, both have been concerned with the same ‘critical epistemological problematic’. Moreover, in addressing the questions of which this problematic consists, both have adopted the same broad, intersubjective conception of truth. Thus, contrary to claims that the critique of Positivism in IR resulted in a pluralisation of perspectives, it produced a broad critical tradition which has developed within a clear set of parameters

Critical Theory World Politics International Politics Human Interest International Relation
These keywords were added by machine and not by the authors. This process is experimental and the keywords may be updated as the learning algorithm improves.
This is a preview of subscription content, log in to check access.