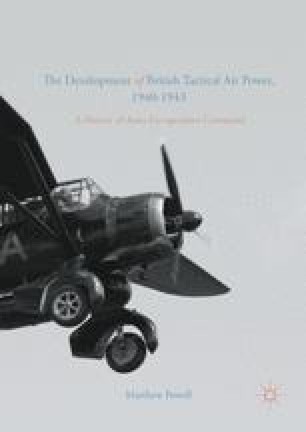 Army Co-operation at Home and Abroad

This chapter looks at the developments in tactical air power in Britain and the British Empire through an analysis of army co-operation exercises and operations conducted respectively. It also highlights the differences of opinion between the Royal Air Force (RAF) and army in Britain over how tactical air power should be applied in future warfare and the developments made by the Luftwaffe as it was expanded and utilised in conflicts such as the Spanish Civil War. It provides a wider historical context by analysing the problems faced by all Services during the inter-war period such as international disarmament efforts, the economic difficulties and the lack of a recognisable first-class enemy against which to prepare plans.

Interwar Period Close Support Land Force Independent Force Ground Troop
These keywords were added by machine and not by the authors. This process is experimental and the keywords may be updated as the learning algorithm improves.
This is a preview of subscription content, log in to check access.