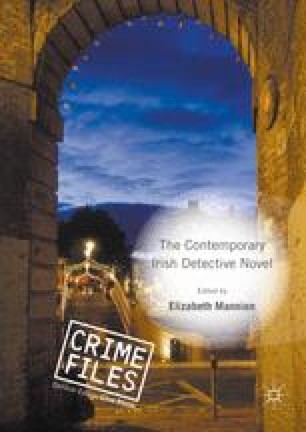 The ten novels in Ken Bruen’s Jack Taylor series span the years of Ireland’s epic cycle from boom to bust to modest recovery. Kincaid reads the last four novels of the series in light of Ireland’s economic collapse, the bank bailout, the introduction of mass austerity, and the rise in emigration. The chapter presents these Irish crime novels as national allegories. It also explores the philosophical connections between noir and its roots in existentialism. Working methodologically with three approaches—cultural context, existential criticism, and noir aesthetics—Kincaid examines the concept of hope, in particular what hope looks like for Jack Taylor, a modern detective in an Ireland caught between shock and renewal.

False Hope Corrupt Politician Irish Language Moral Ambiguity Cynical Attitude
These keywords were added by machine and not by the authors. This process is experimental and the keywords may be updated as the learning algorithm improves.
This is a preview of subscription content, log in to check access.