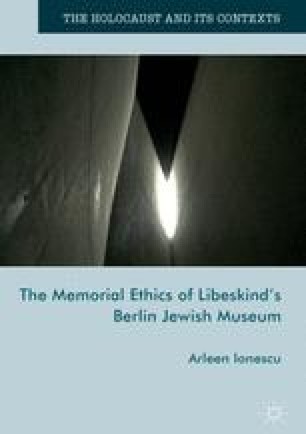 Introduction: A Museum with a View

This monograph was born from a 2011 trip to Germany, in which my family and I were touring sights associated with the Second World War, including Holocaust memorials and monuments erected in the 1990s, such as Daniel Libeskind’s Berlin Jewish Museum. There were so many reasons to feel overwhelmed in Libeskind’s ‘experiential’1 museum that we hardly even noticed that we spent almost a whole day exploring it: the antithesis between the practically untouched baroque building of the Kollegienhaus and its avant-gardist extension, the structure of a distorted Star of David, the descent into Libeskind’s voids, the three roads or axes that he built inside his museum (the Axis of Exile, the Axis of the Holocaust, the Axis of Continuity) and the corresponding dead ends to the first and second axes (the Garden of Exile, the Holocaust Tower). All these clashing elements gave us no other choice as visitors but to give up our traditional role as passive consumers of exhibits. I remember to this day staying long in front of every single artefact showcased on the Axis of the Holocaust and the Axis of Exile in an irresistible need for historical recollection and an impossible communion. But the most overwhelming experience was inside the Memory Void and the Holocaust Tower, those empty, jarring spaces cutting vertically through the zigzagging structures of the museum.

Oxford English Dictionary Ground Zero Holocaust Denial Holocaust Memorial Passive Consumer
These keywords were added by machine and not by the authors. This process is experimental and the keywords may be updated as the learning algorithm improves.
This is a preview of subscription content, log in to check access.