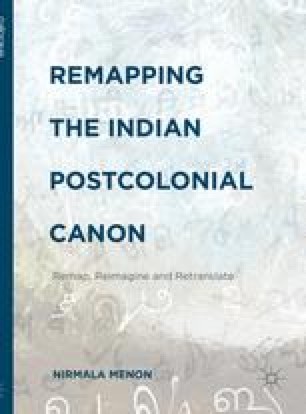 Introduction: The Rationale for Re-mapping the Postcolonial Canon: Why Re-map?

In a book chapter in the wonderful edited collection Re-routing the Postcolonial, I made an argument for “re-routing” the postcolonial through the language mazes of the postcolonial geography of India. In trying to make an argument for a multilingual postcolonial canon, I did a survey of major databases for literature and the representation of world literature as a disproportionately monolingual one (Menon, 2010). So, as I begin to examine that argument in much more detail through the course of these pages, I have to once again consider the question: What does the current map look like? My study then looked at the possible maps of representation through roughly the early 1990s when postcolonial studies began to be acknowledged as an emerging area of research, until 2007. My findings were very clear—the putative postcolonial canon includes texts from India, Africa and the Caribbean, with new entrants from Latin America adding to the diversity. When it came to the Indian subcontinent, study of works of writers such as Salman Rushdie, Arundhati Roy, Vikram Chandra, Shyam Selvadurai and J.M. Coetzee far outnumber study of works by writers in languages other than English. It was true that while the emerging canon did represent many postcolonial geographies, they did not reflect the linguistic diversity of those geographies. Quite the contrary. Almost all of the representative works in scholarship were exclusively written in English. I retain the discipline’s skepticism of “canons” per se but argue that, when the same texts and writers are anthologized and critiqued to the exclusion of others, it is equivalent to creating a canon. I begin with the assumption that engaging with the rich literatures in diverse languages coming from different postcolonial spaces will simultaneously underscore the plurality of the discipline and open new avenues for postcolonial enquiries. As Neil Lazarus charges:

Literary Production Literary Work Indian Language Regional Language Postcolonial Theory
These keywords were added by machine and not by the authors. This process is experimental and the keywords may be updated as the learning algorithm improves.
This is a preview of subscription content, log in to check access.