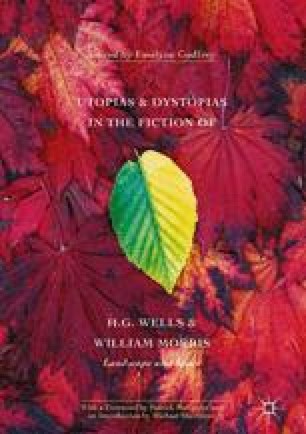 Utopias and Dystopias in the Fiction of H. G. Wells and William Morris pp 75-87 | Cite as

‘All Good Earthly Things are in Utopia Also’: Familiarity and Irony in the Better Worlds of Morris and Wells

Nicholas Ruddick notices the ‘strict unity of place’ that characterises The Time Machine.1 It seems an innocuous remark made in passing, but serves to draw our attention to the relatively static character of the time traveller’s journey: changes of scene are effected by the turn of a dial and notwithstanding a dive into the river and a museum visit, the most important exploration made in the year 802,701 is underground and back again rather than lateral. To describe this time-travelling tale as ‘static’ is a little mischievous, for it was the term Wells used to disparage William Morris’s society of Nowhere, of whose inhabitants the Eloi appear to be a parody.2 The word is not chosen to antagonise Wells’s enthusiasts, but to introduce a discussion of the qualities in common of the two writers’ possible worlds, which tend to be downplayed within a literary-critical tradition that has presented them as ideological adversaries or on either side of a cultural transition which could be glossed as the passage from utopian to science fiction. Darko Suvin devotes a chapter of his hugely influential Metamorphoses of Science Fiction (1979) to ‘Wells as the Turning Point of the SF Tradition’; Carl Freedman, despite his appreciation for Morris’s ‘political intellect’, describes News from Nowhere as ‘predominantly precritical and pre-science-fictional in monologic form’.3 My claim is that the familiar topography in News from Nowhere (1890) and A Modern Utopia (1905) provides the basis for ironic reflection by both authors on the qualities of the utopian imagination itself.

Morris Study Science Fiction Good World Museum Visit Utopian Imagination
These keywords were added by machine and not by the authors. This process is experimental and the keywords may be updated as the learning algorithm improves.
This is a preview of subscription content, log in to check access.