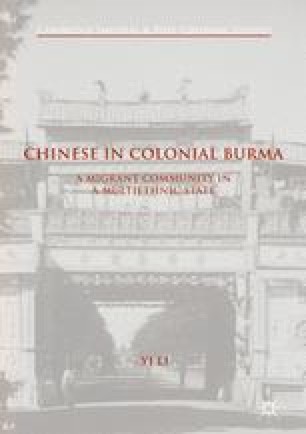 Merchants of the Empire

Through contemporary English publications and popular Chinese anecdotes, this chapter introduces several Chinese tycoons and their enterprises in major Burmese towns; their reputed commercial skills, social engagements, and extravagant lifestyle, along with ordinary Chinese workers and laborers, were a much neglected aspect of the Chinese workforce that was intentionally downplayed by various institutional actors in the colony. The chapter concludes with explorations on the imperial impressions of the model “merchant” versus the model “laborer” throughout the British Empire, along with two most potent contenders, the Chinese and the Indian. With both “foreign Asians” presented in Burma as the colony’s key sources of labor and capital, the prevailing imperial discourse as well as the community’s self-identifications were contested and had to undergo slight yet critical adjustments.

Chinese Community Chinese Business Chinese Reader European Coloni Indian Laborer
These keywords were added by machine and not by the authors. This process is experimental and the keywords may be updated as the learning algorithm improves.
This is a preview of subscription content, log in to check access.