Gendered Citizenship and the Politics of Representation 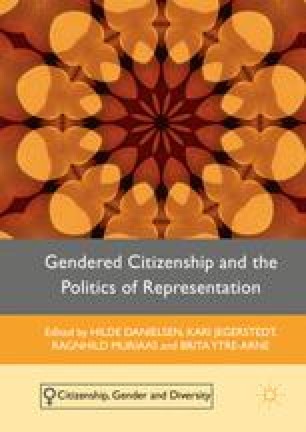 Vietnam Women’s Union and the Politics of Representation: Hegemonic Solidarity and a Heterosexual Family Regime

Proficiently oscillating between its role as a governmental mass organization and a grassroots movement, the Women’s Union in Vietnam emerges as a kaleidoscopic body with a dual representative role. Initiatives taken by the Union revolve around women and their lives as organized in the predominant family constellation in the country; the heterosexual family in either its nuclear or extended form. Construed as a congenital point of departure, this family regime provides a platform from which the Union pursues a hegemonic solidarity with women and their lifeworlds by dealing with female-specific issues such as intimate partner violence, child rearing, and income generating activities. This chapter considers the dual representative role of the Union and the ways in which it has become the voice of a hegemonic solidarity with heterosexual women and their families in Vietnam. The Union’s characteristic politics of representation in particular, the chapter argues, is epitomized with regard to current contestations in Vietnam over the legal recognition of same-sex marriage.

Intimate Partner Violence Civil Society Heterosexual Woman United Nations Development Program Mass Organization
These keywords were added by machine and not by the authors. This process is experimental and the keywords may be updated as the learning algorithm improves.
This is a preview of subscription content, log in to check access.

Data was collected within two different research projects both of which have been generously funded by the Swedish Research Council (Vetenskapsrådet); i.e. (1) ‘Challenged Feminism: The Women’s Union in Late-Socialist Global Vietnam’ which is part of a larger project on ‘Imagining Change: Women and the Making of Civil Societies in the Arctic Region, Asia, Latin America, and Europe’. And (2) ‘Recognition and Homosexuality: The Socio-Cultural Status of Same-Sex Relations in India and Vietnam’. James Scott, as well as Andrew Arato, provided helpful comments on a previous version of this text and so did Randi Gressgård and Nguyen-vo Thu-huong. At the Max Planck Institute for Social Anthropology in Germany to which I was invited by Kirsten Endres and Minh Nguyen, stimulating comments were offered on an earlier version of this chapter. Communication with Anindita Datta, Steffen Jensen, Naila Kabeer, Ravinder Kaur, Catarina Kinnvall, Don Kulick, Åsa Lundqvist, Diana Mulinari, Huong Thu Nguyen, Mina Roces, Oscar Salemink, and Gabi Waibel about civil society has been inspiring and so have the Civil Society workshops at Vetenskapsrådet. The volume editors, a referee, and the ‘Ida Blom Conference on Gendered Citizenship, History, Politics, and Democracy’ (University of Bergen, 2013) facilitated the work with this paper. I am very grateful to the persons and organizations in Vietnam who were willing to participate in this research.