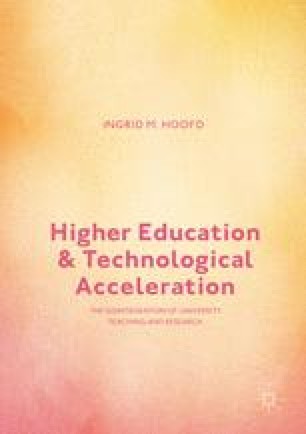 This chapter outlines a novel theoretical framework for reinterpreting the current dislodgement of the university in the neo-liberal context. Using the ideas of Jean-François Lyotard, Jacques Derrida, and Paul Virilio, the chapter will argue that the contemporary university has fallen victim to its own quest for perfect communication and illumination. The chapter therefore proposes that the prime mission of the university around truth, culture, and knowledge also produces its unjust practices ‘outside’—through social stratification—and ‘within’—through creating exclusions and hierarchies—today. The chapter concludes that the current university and its forms of violence are not so much an effect of a neo-liberal onslaught, but rather an outflow of ‘outdated’ humanist ideals whose internal contradictions have become usurped and accelerated under neo-liberal capitalism.

Vision Machine Digital Technology Critical Theory Ivory Tower Grand Narrative
These keywords were added by machine and not by the authors. This process is experimental and the keywords may be updated as the learning algorithm improves.
This is a preview of subscription content, log in to check access.