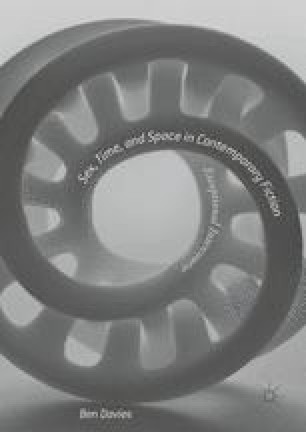 Sexual Sets: The Act of Love

Reading Agamben’s interpretation of set theory together with Howard Jacobson’s The Act of Love, Davies argues that the protagonist’s desire to be cuckolded by his wife results in the creation of a sexual set, of which he is an exceptional element. Consequently, this exceptional member experiences spatiotemporal indeterminability and the indistinction between law and transgression, as well as forms of abandonment. Through an analysis of textual relations via set theory, Davies also argues that the narrator controls the reader as if the narrator were a sovereign power, and that both reader and narrator have exceptional relations to the text, occupying threshold positions. Davies closes the chapter by arguing that the exclusively included position of the reader in relation to the text constitutes reading itself as an exceptional form of interaction.

Premature Ejaculation Sexual Pleasure Bare Life Narrative Discourse Exceptional Element
These keywords were added by machine and not by the authors. This process is experimental and the keywords may be updated as the learning algorithm improves.
This is a preview of subscription content, log in to check access.