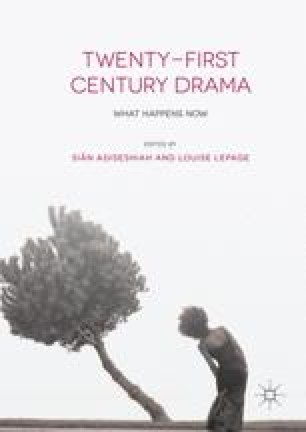 Sixteen years into the new century seems a propitious moment to publish the first collection of essays on twenty-first-century drama. Although still adolescent, the new century has produced a generation: very soon undergraduates with dates of birth in the year 2000 will be enrolling onto university programmes and their lives will have been lived wholly in the new century. Close attention to the social, political and philosophical texture of this new century, and to the drama to which this period has given rise, is now needed. This volume of essays arises from the recognition that while there are several recent critical collections engaging with British and Irish drama in the ‘contemporary’ period (generally treated as stretching back to the 1980s and forward to the present day),1 there is still no full-length study of specifically twenty-first-century drama. Within these pages, our contributors capture something of the range of plays that have populated and characterized this century’s stages, as they respond to recent historical events and to contingent qualities, shifts and paradigms. The volume offers a kaleidoscopic snapshot of critical perspectives arising from cutting-edge research on a prescient and provocative, but by no means comprehensive, sample of the new millennium’s drama.

Financial Crisis Asylum Seeker Theatrical Mediation Dramatic Form History Play
These keywords were added by machine and not by the authors. This process is experimental and the keywords may be updated as the learning algorithm improves.
This is a preview of subscription content, log in to check access.