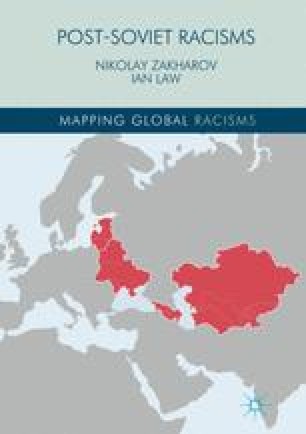 Post-Soviet Trajectories of Race and Racism, an Endnote

Healing broken national histories, healing the fragmentation of empire, strengthening social solidarities in threatening times, new racial discourses provide both the comforting arms and the strait-jacket for post-Soviet states. Opening new paths to national visions, providing certainty, providing surety, providing a blow-hole for the whale/wail of national rage and hate, newly forged racisms will define the twenty-first century. New walls, new surveillance, new exclusive nations are the stuff of contemporary governance. Gone are the inclusive visions of utopia, gone are the wonders of transversal multiculturalisms and the joys of human freedoms. Closing the gates, closing the paths to social and economic mobility, slamming the door on many voices and many human stories is what it is to be alive today in the post-Soviet world and elsewhere. The sad immiseration of the indebted many, the playful riches of the few are the patterns of inequality stratified by the racialized marking out of many groups of ordinary people. New languages of racial ordering and new modes of racialized governmentalities have been identified across these highly varied post-Soviet republics. Hierarchies of state regulation, hierarchies of violence and hierarchies of core preserved, protected majorities and persecuted minorities structure everyday life from Latvia to Tajikistan.

Social Solidarity Economic Mobility Alive Today National Vision Racial Discourse
These keywords were added by machine and not by the authors. This process is experimental and the keywords may be updated as the learning algorithm improves.
This is a preview of subscription content, log in to check access.