British Idealism and the Concept of the Self 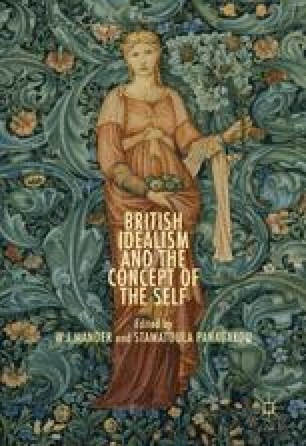 Self, Not-Self, and the End of Knowledge: Edward Caird on Self-Consciousness

This paper examines Edward Caird’s theory of experience. Influenced by Kant and Hegel, Caird argues that human experience consists of three distinguishable components. First, there exists an awareness of the world of external objects and events; this is the ‘not-self’ pole of experience. Second, there is, to a greater or lesser extent, an awareness of myself as a finite individual who stands in opposition to the world; this is the ‘self’ pole of experience. And third, there exists an awareness of the unity of myself and the world. This unity, which contains both self and not-self, Caird refers to as the ‘absolute’ or ‘God’. Caird argues that my finite and limited self-consciousness is but a truncated expression of this perfect self-consciousness that constitutes its ultimate ground.

Collect Work Conscious Experience Object World Empirical Content Universal Consciousness
These keywords were added by machine and not by the authors. This process is experimental and the keywords may be updated as the learning algorithm improves.
This is a preview of subscription content, log in to check access.